Mining fact: The deepest mine in the world is Mponeng gold mine in Johannesburg, South Africa

The South African mining industry is responsible for large-scale development of the country. Second only to Nigeria, South Africa has the most advanced and richest economy of all the countries on the African continent. Like many other African countries South Africa is rich in mineral wealth. Unfortunately it is also not always politically stable. Violent strikes happen reasonably often in the industry which is rife with corruption.

Despite prevalent issues, South Africa remains the world’s biggest producer of platinum, vanadium, vermiculite, manganese and chrome, and the fifth largest producer of gold in the world. It is also the third biggest exporter of coal around the globe.

Mining in South Africa started when a man called Erasmus Jacobs discovered a diamond on the banks of the Orange River in 1867. Thereafter the Kimberley pipes were discovered and then the gold rushes to Barberton and Pilgrim’s Rest started. In 1886 the biggest discovery was made which hailed the Witwatersrand Gold Rush and the massive development of the gold fields there.

According to the US Geological Survey, South Africa held as much as half of the world’s gold resources and almost 40% of its reserves as in 2002. In 2005 the country’s gold exports were valued at around US$3.8 billion. As in 2016 the two deepest gold mines in the world are located in South Africa; AngloGold Ashanti’s Mponeng gold mine which is beyond 4 kilometres deep and TauTona, also an AngloGold Ashanti mine which extends to beyond 3.9 kilometres. At these depths the temperature of the rocks are around 60 °C. Gold is South Africa’s second largest source of foreign income.

South Africa is the world leader in diamond production since the diamond strike in Kimberley in 1868. The seven largest diamond mines in South Africa are controlled by De Beers Consolidated Mines Company. De Beers is responsible for nearly 100% of the total diamond output of the nation.

Because of poor administration and corruption in South African mining, government officials announced in 2013 that mining companies guilty of misrepresentation will have their licenses revoked.

While under Portuguese rule, Angola was one of the world’s largest producers of iron ore. This came to an abrupt halt with the start of the civil war and the destruction of most of the existing mining infrastructure. It was only in the late 2000s that the iron ore mining sector started a slow recovery.

Angola exports more petroleum than any other country in southern Africa, and even overtook Nigeria as the leading producer during the early 2000s. In 2007, Angola became a member of OPEC. The exploration of deep-water offshore oil fields is set to double output in the next ten years. It is the third-largest trading partner with the USA. The exportation of oil makes up for 90% of Angola’s total exports.

A Legacy of War

Angola may be a booming economy at present but the legacy of the decades-long civil war hamper true economic growth. 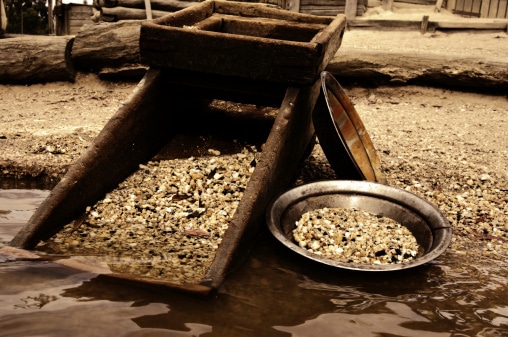